5 Important Features For Every Gaming TV

We all love gaming in one form or another, and as such its rapidly grown into the largest form of entertainment available.

If you need to blow off some steam after a long day, theres nothing better than being sucked into a tense match of FIFA or to escape into the forests of The Witcher.

So, naturally, you want the best experience when gearing up to game. No longer is the difficult choice just down to which console you pick, the TV you play on has a massive impact on your experience too.

Modern TVs have chased picture perfection, competing with a mixture of hardware and software solutions to try and create crystal clear images. This has come at the cost of increased processing per frame, resulting in a phenomenon called input lag to rear its ugly head.

TVs have always suffered from some level of input lag, which refers to the length of time between an input and the associated action on-screen, but older technologies had such a negligible figure (<5ms) that it was not a concern. Nowadays, modern TVs can have input lag ratings well over 100ms  thats more than 1/10th of a second in delay when gaming!

Were experts on what makes a truly great Gaming TV, testing our products in-house to ensure you get the perfect model for your needs. Here are 5 of the things we recommend considering when looking at a modern TV for gaming.

This is by far the BIGGEST factor for most hardcore gamers.

The measured time between the press of a button on your controller to the corresponding in-game action being displayed is represented as a TVs input lag rating. Quite literally, the figure given is the amount of time that will pass between your actions and the on-screen result.

If the input lag of your television is too high (we rank anything under 50ms to be good and under 25ms excellent) you can be put at a huge disadvantage in competitive multiplayer games  add nearly 100ms on to every reaction you make and youll quickly realise how off-putting it can feel. Unfortunately, information isnt always readily available for the input lag rating of a television, with many manufacturers omitting the figure entirely.

We use a Leo Bodnar Input Lag Tester to find out how our TVs perform, with published results available in the specifications of a televisions product page. If you play a lot of multiplayer games, this will be the number one factor to purchasing a new TV  we highly recommend anything under 25ms.

Popular home consoles have displayed content in Full HD resolution (1080p) for the past 10 years, so hasnt been a factor to consider until the announcement of the PS4 Pro & (codenamed) Xbox Scorpio. Both promise to deliver 4K Ultra HD gaming in our living rooms, so if you have your eye on one of these, it might be wise to consider picking up a 4K Ultra HD TV in preparation.

Keep in mind that outputting a 1080p signal from your PS4 or Xbox One to a 4K Ultra HD TV works just fine, so even if you dont plan on making the incremental upgrade to 4K just for gaming, you can still benefit when watching Ultra HD films or television.

Think about your console of choice, additional devices you plan to use, and then decide from there. Ultra HD adoption is increasing, but Full HD is still the vast majority of content available, so you wont be left behind in 2 years if you choose that route. 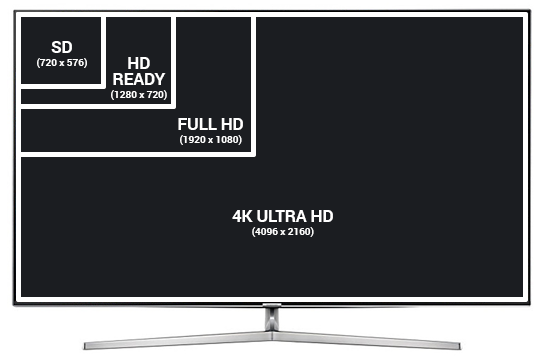 HDR has been positioned as the largest leap in visual quality since the jump to Full HD from standard resolution, meaning that picking up an HDR compatible TV might be a wise decision if youre looking at the new consoles.

If youre looking for an affordable, Ultra HD TV with HDR compatibility, this Samsung UE49KU6400 UHD TV is a great pick.

For most people, all youll need is an HDMI port for your consoles. The current and previous generation of consoles are compatible with an HDMI connection, of which all HDTVs will be equipped with.

Once more, the new consoles shake up the technology requirements significantly. To play games in 4K on the PS4 Pro, for example, Sony has confirmed that an HDMI 2.0 cable and port is required to ensure 60fps performance at 4K Ultra HD resolution. Check your chosen TV has the required ports for your desired console or peripheral (Ultra HD Blu-rays also use HDMI 2.0) before you commit to a purchase.

If youre a retro junkie things get a little more complicated. Youll want to ensure that you have at least 1 SCART socket available for your trusty PS2, while older consoles often use an aerial socket (which may require an RF receiver to work, system depending) to display correctly.

Our advice is to have a clear idea of what peripherals you plan on using, whether consoles, an Ultra HD Blu-ray Player or set-top box, and mapping out how youll connect it to your tele-to-be. Its a little time consuming but well worth the effort!

Most TVs should have this feature (often found in the display settings menu), but its important to check. Game Mode (can come under a different name) is a picture mode that removes a lot of unnecessary post-processing used for displaying regular content.

The difference can be staggering; input lag can drop by up to 80%, giving you a much smoother and responsive experience. We test all our TVs with Game Mode enabled when possible to get the most accurate results.

Theres a lot to think about with the upcoming mid-generation refreshes in the PS4 Pro and Xbox Scorpio on the way. Depending on what you play and how often, youll find different aspects more integral to your enjoyment  some TVs might be monster home-cinema screens for the film fan in you, but might not fare quite as well in the gaming department as another panel.

Whatever you spring for, our carefully selected range of gaming TVs will give you a stellar experience for gaming, film and television.

What Is an Induction Hob and How Does One Work?

How to Defrost a Fridge Freezer

What Is a Self-Cleaning Oven and How Does One Work?